Your browser is out-of-date.

We no longer support this browser version.

For a better experience, keep your browser up to date. Check here for latest versions. 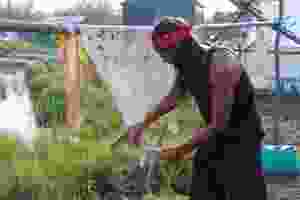 Dene Nahjo founding member Daniel T'Seleie is making the news this week with his campaign to help bring solar energy to communities in Denendeh.

"Right now a lot of communities in the Northwest Territories are dependent on diesel-generated electricity, along with store-bought food," said T'seleie in an open air interview near Behchoko, a clutch of small wooden houses nestled along the shores of Great Slave Lake.

Standing beside spindly jack pine trees growing from thin soil on the hard granite rock that covers much of northern Canada, T'seleie sees renewable energy as the force which could respond to the region's complex, intertwined challenges.